You’re Not Going to BELIEVE the Real Reason “GI Joe: Retaliation ” Got Pushed Back to March 2013 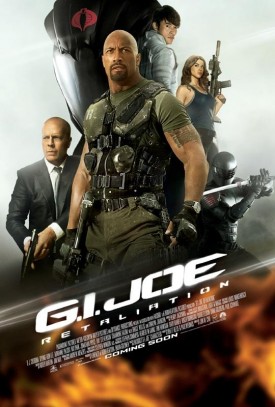 I’d heard it tested poorly, but I had no idea that one of the main things that they need to go back and change is that test audiences were upset that Duke, played by Channing Tatum, died in the beginning of the film.

The fact is that Paramount became extremely concerned about G.I. Joe 2‘s box office prospects worldwide after test scores were mediocre to bad. Reshoots were needed. Plus, the moguls realized what a complete miscalculation it was to kill off Channing Tatum in the sequel. And even more so at the start of the film. You will remember that Tatum wasn’t a star when the first G.I. Joe was released. But since then his back-to-back successes in The Vow and 21 Jump Street have made him into a draw. And it turned out that the only bright spot for audiences as a result of the G.I. Joe 2 testing was the aborted relationship between Tatum and Dwayne ‘The Rock’ Johnson. Plus look at the movie poster for Retaliation: you wouldn’t even know Tatum is in the sequel. Now the movie is being reworked – and reshoots don’t lose a valuable leading man like Tatum by killing him off.

In case you miss the reference, the death of Duke in the animated “GI Joe: The Movie” had to be undone in post-production because kids were very, VERY upset. Their fix was to add lines of VO dialogue where someone notes “he went into a coma” and, during the victory celebration after the climatic battle with Cobra, someone randomly yells out something like “Duke’s gonna be okay!”

They should’ve just done the same thing here. That would’ve been awesome.

Well, anyway, this film’s going to be even worse than the first one and anybody that thought otherwise needs to have their head examined. A big problem with the first film is that it was one of the goofiest films I’ve ever seen, and yet it still somehow managed to be completely and utterly joyless. If it had been done on purpose, I would consider it art.